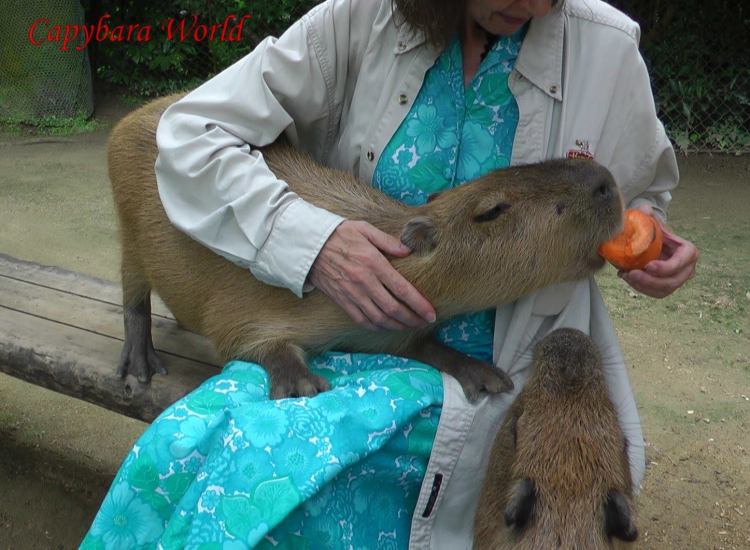 Zabon on my lap with Maple trying to steal a bite of the carrot. 私のラップでザボン。メープルは、ニンジンを盗もうとします 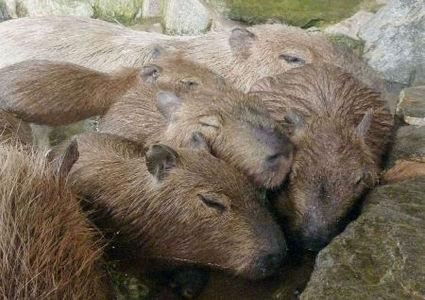 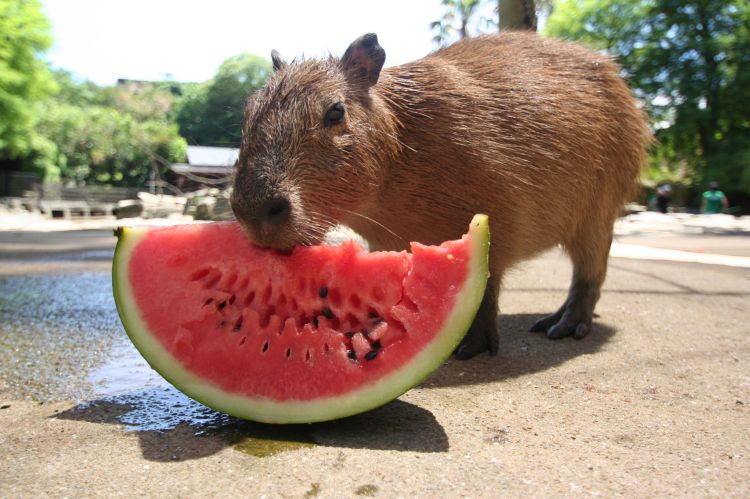 Little baby Io was the youngest capybara at the Bio Park in August 2012; he was 5 months old but looked even younger. He was  a small capybara.  Even though he was only a month younger than Nina, he was half Nina’s size.

Little baby Io likes to sleep on top of the other capybaras. He will notice a cluster of capybaras napping and scramble on top of them waking them all up in the process. Then he flops down in the crevice between two capybara bodies. Some of the female capybaras object to him disturbing them and  move away or gently kick him, but Yasushi, his father and The Boss Capybara, is always very kind and forgiving; when Io’s little foot lands on his face he will wake up startled and then settle back down to sleep.

There is a special bond between Io and Yasushi.   Yasushi is the Boss Capybara, as the breeding male is called, at the Bio Park, the only male, and the most important capybara in the hierarchy.     Io seems to like being near Yasushi.   He  sleeps right next to him, and often shares his watermelon tray. Yasushi is always very gentle and paternal towards Io, never pushing him away as Io searches out the juiciest, sweetest morsels of watermelon from Yasushi’s tray. Yasushi and Io play together in the pond. Io seems to sense that Yasushi loves having his ear rubbed, so baby Io will chew on his ear sending Yasushi into paroxysms  of bliss. Yasushi then rolls over on his back and sinks under the water, surfacing a few minutes later looking blissful and completely out of it. Eventually Io tires of the game and swims off. 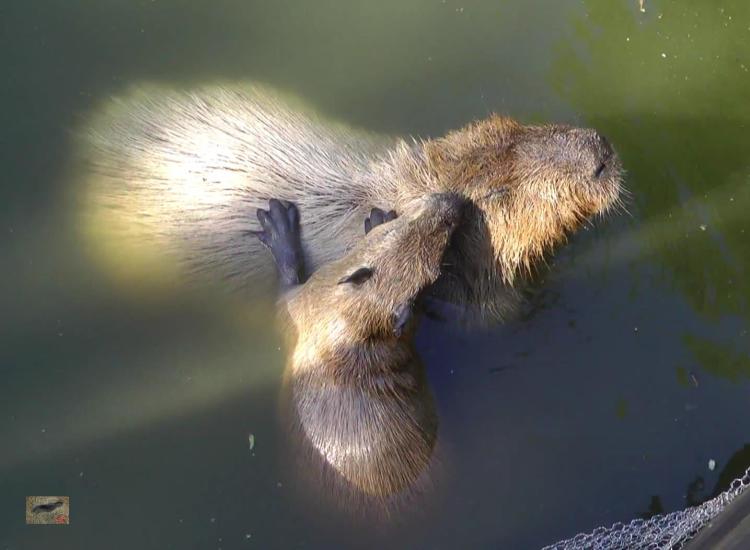 From time to time five-month-old Io  dreams of his mother’s milk and his days suckling Donguri.   He sets off to find the nearest female nipple.   Often this will be a young female like Ayu who has never given birth and where there is no chance of finding milk.

Io is very self-possessed, independent and confident. No Capybara can intimidate him, not even the late Aki.  She was the powerful and intimidating Number One in the female hierarchy.   She intimidated all the other female capybaras. If Io wants a particular piece of watermelon, or to share the watermelon tray of a dominant female, nothing will put him off, not even the nips and bites he inevitably encounters.

Io playing. I could watch Capybaras playing together for hours. I had no idea how playful they are.     は 遊ぶ。私はカピバラが何時間も一緒に遊んで見るのが大好き。彼らはとても遊び心アール

Donguri and her baby son Io on Capuchin Island. どんぐりと彼女の赤ん坊の息子カプチン島のイオ。

When we first started visiting the biopark, Donguri and Io would be alone eating the grass on Capuchin island.   Perhaps Donguri was ensuring that her baby got plenty of nourishing fresh green grass, but I always felt it was in part to keep him away from, and protect him from, the hordes of human visitors.   After Donguri and I became friends, we would find her waiting for us each morning, sitting by the bench where we always sat.   Donguri was a wonderful mother, in the video below you can see her affectionately kissing and nuzzling Io,  who returns the affection, as they play in the pond. 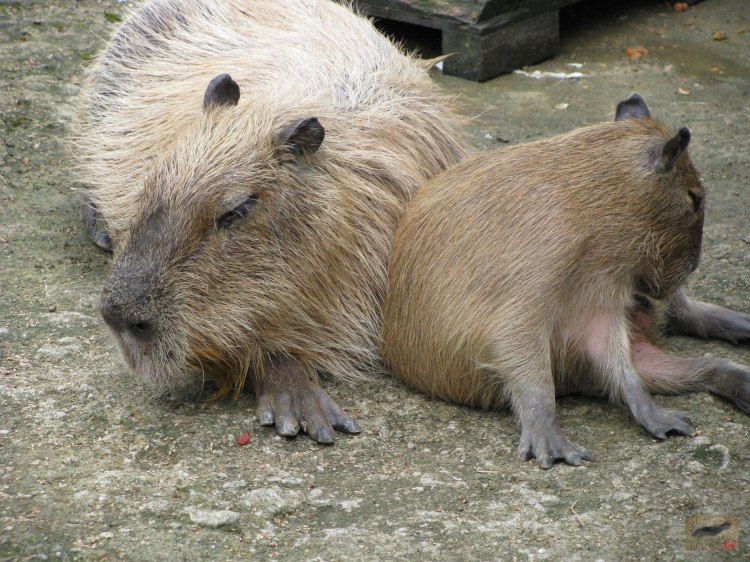 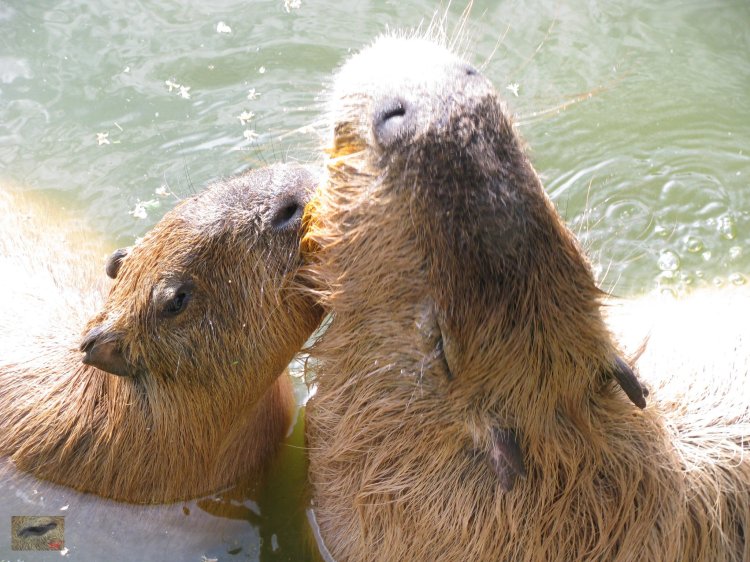 When Io gets to be one year old he will have to leave the Bio Park. Male capybaras have a strict dominance hierarchy and fights would break out between the males if there was more than one mature male in the enclosure.

Io will make a wonderful Boss Capybara at another zoo, where some of his offspring will inherit his mother, Donguri’s, outstanding, sweet gentle character.

Io’s father is Yasushi, his mother is Donguri. He was born at Nagasaki Bio Park on 18th of March, 2012

Yuzu and Zabon; these two are so adorable. They are very vocal and come over, when we arrive, to be pampered. They are the youngest capybaras after ‘baby’ Io who looks about 3 months, but is in fact 5 months old. They always seem to be hungry. They point their noses up in the cutest way to indicate they want something to eat, and I haven’t the heart to delay their request while I take a photo.
ゆずとZabon、これらの2つはとても愛らしいです。彼らは非常にボーカルです。我々は、ちやほやされるため、到着に到着した。彼らは常に飢えているように見える。彼らは自分の鼻がかわいいです方法を指す。それらを食べるために何かをしたい。 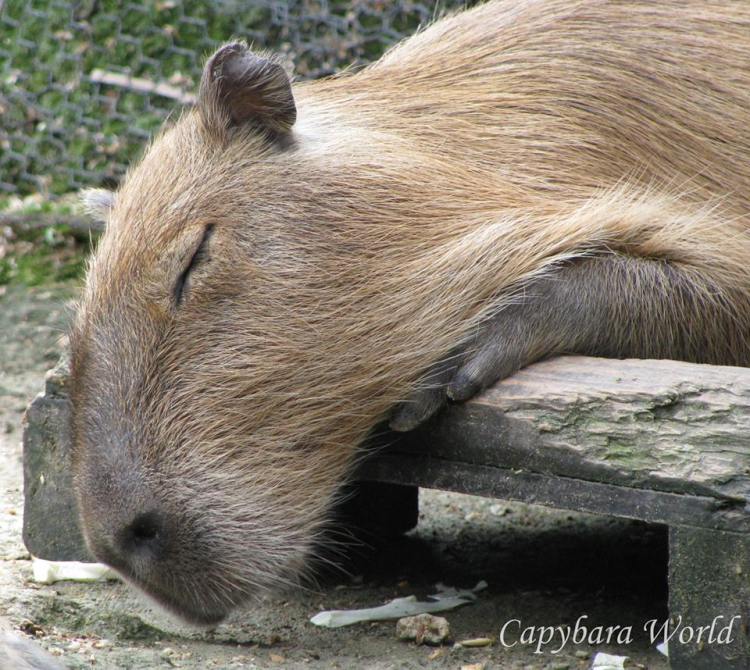 Yuzu and Zabon, Aki’s two daughters, seem to have inherited more of Donguri’s sweet personality than Aki’s more dominant personality, especially Yuzu. Yuzu and Zabon are usually to be found close together often sleeping nose to tail or side by side, each seemingly quite happy to have her nose stuck almost inside the others bottom!    Sometimes Io comes over and climbs on top of them when they are side by side, settling in between them… they never object, sweet capybaras that they are. 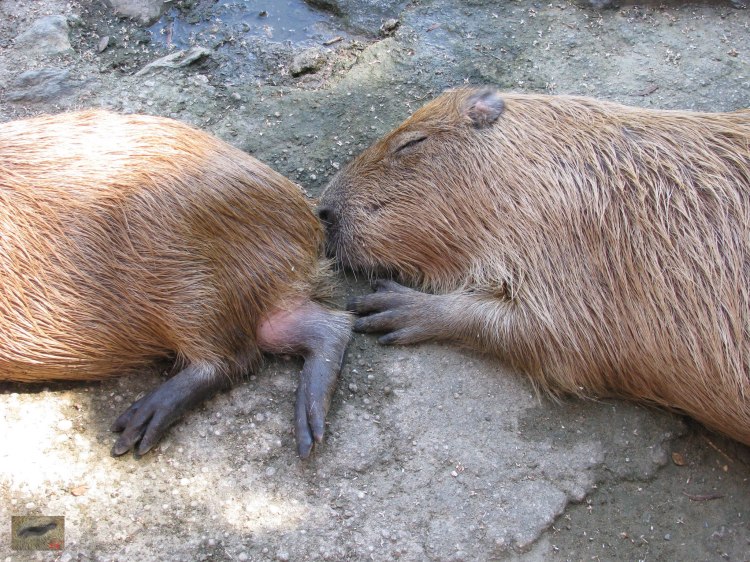 Yuzu and Zabon usually stay close together. Very often sleeping nose to tail with one capybara nose in the other capybaras bottom ゆずとZabonは通常、近くに一緒に泊まりました。非常に多くの場合テールに鼻を眠っています。他のカピバラの底に1カピバラの鼻 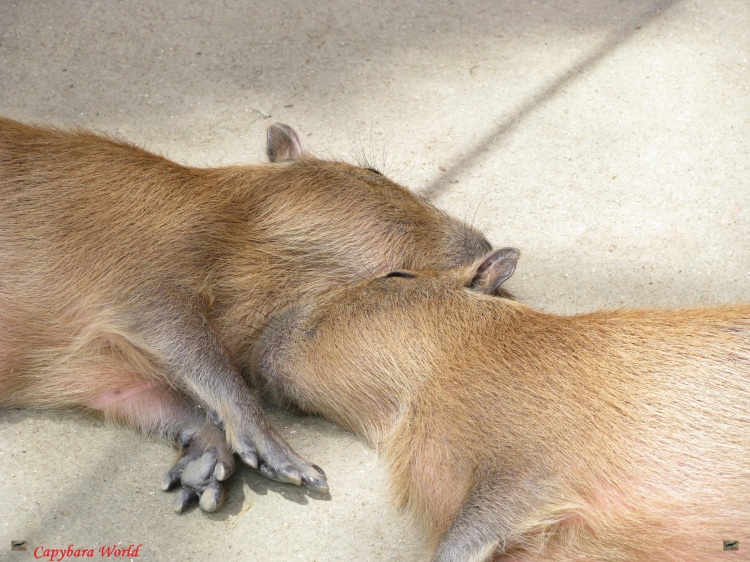 Yuzu and Zabon, sleeping together as usual. They are often very vocal

A few minutes later Yusu rolled over and fell off the feeding tray she was sleeping on. I love the way Capybaras like to sit on or sleep in their food trays 数分後Yusuがロールオーバー。 Yusuは、食品トレイから落ちた。 かわいいので – カピバラは、その食品トレーで寝るのが好き 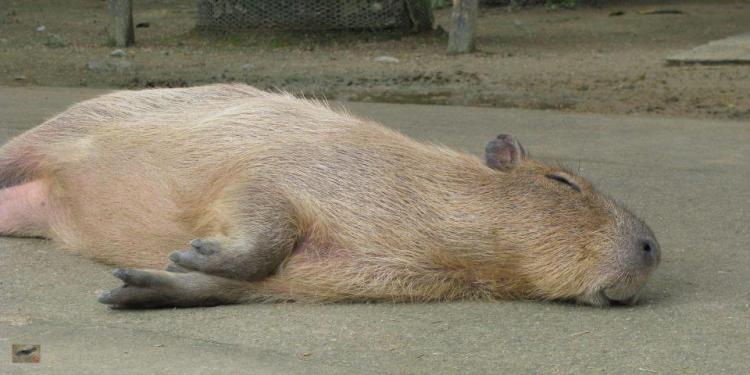 Adorable young Nina, dreaming. 7 months old, and a male capybara. He will stay at the Bio Park until he is about a year old and then go off to become a breeding male at another zoo. 愛らしい若いニーナ。七ヶ月。カピバラ男性。彼が1歳に達するまで、私はバイオパークに滞在。成人男性のカピバラの戦い。 彼らは別の筐体に移動する必要があります。 彼は別の動物園で1日ボスカピバラ意志 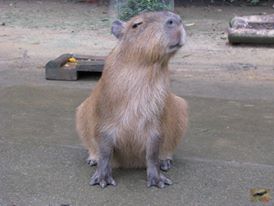 Nina is a much more pugnacious personality as the various cuts and scars he acquires testify.    He is always hungry, always demanding food in the nicest possible way, but always extremely determined.    On one occasion when there was nobody around to buy food pellets for him, he sat looking intently at the food dispenser dreaming of those nice round containers full of delicious pellets. He hatched a plan to attack the dispenser as you can see in the video below.  Unfortunately for him he had no success;  those nasty humans have made the dispenser capybara proof…how thoughtless of them.   Although Nina is only one month and 11 days older than Io he is more than twice Io’s size.    Definitely a dominant male in the making.

Just before we left Japan at the end of August, Nina injured his eye quite seriously, scratching the cornea during a round of play fighting.    He had to be removed from the enclosure for medical treatment and it was decided that, with his boisterous nature, it would not be a good idea to put him back with the herd after his long absence.    He is still at Nagasaki Bio Park and makes starring appearances at the flower dome with Io for company. Everyone adores them

Nina’s father is Yasushi and his mother is Momiji. He was born on 7 February, 2012 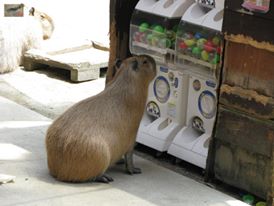 Nina dreaming of the little round food containers full of delicious pellets, but since nobody seems to be feeding him he is hatching a plot to attack the food dispenser

As he does in this video