Following Donguri’s death Hinase became number one in the Bio Park herd. A capybara doesn’t become number one without being intelligent and clever.

I thought Hinase would be my least favourite capybara after Donguri’s death as she was the only capybara ever to test Donguri. This happened on two occasions and as Donguri did not like aggression and also probably knew that she was now weaker than Hinase due to her age, Donguri accepted Hinase’s behaviour without retaliating. 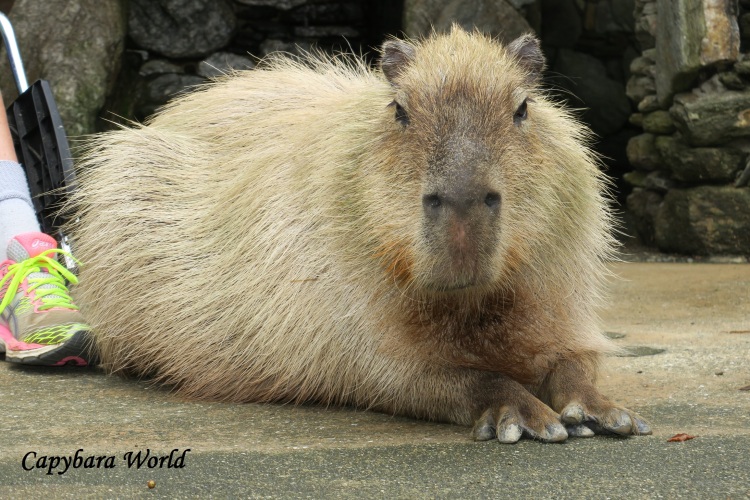 On one occasion Donguri was sitting in a wooden tub under the Onsen shower when Hinase jumped in beside her. There was not much room and Donguri was visibly upset. I went towards the two capybaras to encourage Hinase to leave. As soon as Hinase saw me coming she jumped out. I find her behaviour very interesting as it shows how intelligent capybaras are. If any other visitor had approached her Hinase would not have jumped out. However Hinase understood exactly what I was doing. She knew Donguri was not happy about her presence in the tub and she knew I was Donguri’s friend and patron. Hinase understood that I was coming on behalf of Donguri to get her to leave the tub.

What puzzles me is why she and the other capybaras at Nagasaki Bio Park never challenge, bite or attack humans. Hinase is much more powerful than me and with those sharp teeth she is much better armed. If she had chosen to challenge me she would have won easily.

Now that Donguri is no longer with us I have come to know the other capybaras in the herd at a very deep level. Hinase in particular has captured my interest. She always has an interesting but slightly lost and confused look in her eyes. She is the leader of the herd but she is not in control of her life; humans control her life and not for the better. Of all the capybaras in the herd she is the one who seems least happy about the presence of humans. Capybara eyes are very expressive and they have a very similar structure to human eyes so it is often possible to read a capybara’s mood by looking at the expression in their eyes.

As a two-year-old Hinase was exceptionally friendly and would often sit on visitors’ laps, especially in winter when laps were warmer and softer than the cold concrete or damp earth.  However, like most of the older capybaras, Hinase has grown tired of the behaviour of too many of the visitors, who tease and taunt the capybaras by waving bamboo in front of them and then pulling it away just as they are about to take a bite. When the capybaras are sleeping some visitors poke their morillos or flick their ears seeming to enjoy watching the morillos wrinkle or the ears wiggle and doing this over and over again. I want to say to them “how would you like it if somebody did that to you when you were trying to sleep?”.

Over the past few years I would occasionally pet Hinase using the leash which she absolutely adored. Although she was not my favourite capybara, her response was so overwhelming and rewarding that I did pet her, especially as other visitors to the Bio Park were spellbound at her response to being petted with a leash or by using my foot with a special technique which I developed and which the capybaras love. She would roll over in absolute ecstasy her hair rising with pleasure. Nobody else ever pets capybaras using a leash or with their foot so it was a novel experience for the visitors to the Bio Park capybara enclosure. (When I use my foot I am extremely gentle and just ruffle the hair on a capybara’s body in the areas which I know gives them the most pleasure.)

This year she started coming to me when she wanted to be petted. I felt honoured. Since I had not spent much time with her I was intrigued by this. I think it shows how clever and intelligent she is as it is not that common for capybaras to specifically choose the person they want to be petted by. I discovered she loved me rubbing her morillo when she was in the mood. Most capybaras do not particularly like having their morillos rubbed. Hinase more than any other female capybara I have known loves to rub her morillo and does so very frequently. The most senior capybara in a hierarchy normally rubs their morillo more often than more junior capybaras.

Unlike Donguri she does not show a great interest in what is going on in the capybara enclosure. She does not have Donguri’s compassionate nature and most of her behaviour is directed towards satisfying her desires.

She seems to want the capybaras to acknowledge her leadership. Most of the capybaras become alert as she approaches ready to jump up and move away if they sense that she might be aggressive towards them. This usually ensures that she is not aggressive towards them. However Butter doesn’t seem to understand this. Butter is near the bottom of the hierarchy and much, much smaller than Hinase. Despite this occasionally and amazingly I have seen Butter approach Hinase when Hinase is eating and look as if she is going to challenge Hinase for some food. The look on Hinase’s face as Butter approaches is priceless, one of absolute disbelief! Hinase frequently chases Butter and the look in her eyes when she is in the mood to chase Butter is one of excitement. Hinase’s eyes protrude slightly more than most capybara eyes and I have to admit I love the sparkle in them when she is in the mood to chase. It’s almost as if she is doing it for fun.

Sometimes she is acting out of frustration when she chases Butter. She desperately wants to be with Toku, the breeding male, and mate with him. As leader of the herd that is her right. She spends many hours rubbing her nose rapidly up and down on the gate to Toku’s enclosure. This behaviour is called Stereotypies, or Abnormal Repetitive Behaviour (ARB) and is a sign of stress. On one occasion as Hinase walked through the petting area, where the capybaras were resting, on her way to visit Toku (she can only rub noses with him through the fence of his enclosure unfortunately) she took out her frustration on every capybara she passed pushing her nose into their bottoms and nipping them!

As she got older Milk, one of Maple’s five pups and just over 16 months old, was becoming more aggressive. One day I noticed Hinase chasing her and decided that Hinase understood that part of her role as leader was to keep the rest of the herd under control. She doesn’t like it when one of the neutered males, Choco or Doughnut, mate with Maple or Butter. Maple and Butter are the only capybaras in the herd who mate with Choco and Doughnut, which in itself is interesting. Hinase seems to accept Choco more than she does Doughnut. Choco is very relaxed and fearless whereas brother Doughnut is more aggressive but very sensitive, restless and perhaps the most nervous capybara in the herd. Doughnut seems most in touch with his wild side and is quick to move away whenever Hinase approaches. In many ways his personality resembles his mother, Momiji.

One day Hinase was challenged by Maple over food. It is very unusual for any capybara to challenge Hinase. Both capybaras sustained some nasty wounds. Hinase had a very painful bite on her mouth which took five days to heal during which time she was obviously suffering. On the third day she came to me at least ten times towards the end of the day asking me to rub her morillo. Rubbing her morillo seemed to provide her with some relief from the pain and discomfort of the wound.

Then I noticed some very interesting behaviour. As the herd were walking back from visiting Toku Aoba went over to Hinase and nuzzled her morillo for some time which Hinase seemed to really appreciate. Aoba was the only capybara in the herd who responded compassionately to Hinase’s suffering. Hinase and Aoba are not particular friends. Aoba is one of the most intelligent and perhaps the most sensitive capybaras in the herd. In the first two years of her life she often tried to enhance her position in the herd by nuzzling the senior capybaras and trying to befriend them. She is the only capybara I have seen use this strategy to improve her position in the hierarchy. She was very successful with Donguri and occasionally Maple would let her share her food trough but she had no success whatsoever with Hinase at that time. 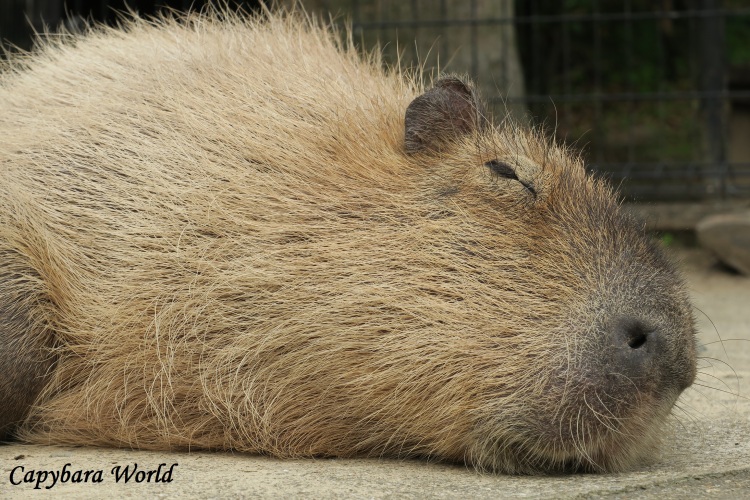 After this I noticed Aoba trying to share Hinase’s food trough with brief periods of success. I also noticed Hinase intimidate Maple on several occasions following their fight to emphasise to Maple that she, Hinase, was “the boss”.

The relationship between Hinase and Momiji, who is second in the hierarchy, is very interesting. You might think they would be competing with each other but in fact they appear to be the best of friends. They play together in the pond, although from time to time Hinase appears to act very aggressively and Momiji swims away rapidly. However Momiji returns almost immediately as if the aggression was very momentary and she knew she had nothing to fear. They ride on each other’s backs in the pond and nuzzle each other playfully. From time to time Hinase will give her extraordinary gruff call, her whole body heaving with the effort. This appears to be a summons to Momiji who dutifully comes swimming over. On other occasions Momiji gives this notable gruff call.

They often sleep together. Only where food is involved does Hinase always win, sometimes being unnecessarily brutal in pushing Momiji away. Momiji never challenges her, wise capybara that she is. A former chief capybara keeper described Momiji as very intelligent. For much of her life she has been number two and she seems quite comfortable in that role. She benefited during Donguri’s four years as leader of the herd, Donguri being Momiji’s mother and with whom she had a very close relationship. Very often Momiji will initiate an activity and Hinase will follow. Hinase is not as active in the pond or on land as Momiji. No other capybaras in the herd spend as much time together as Hinase and Momiji do.

I don’t think Hinase has a high opinion of humans. She seems wary of them and unaware that she is much more powerful physically and could do them a nasty injury if she attacked them. She probably senses that in a world dominated by humans she could never come out on top. She often looks mystified by human behaviour. Like the other capybaras she hates having to beg for food, especially as she is number one in the hierarchy and should be answerable to no one. 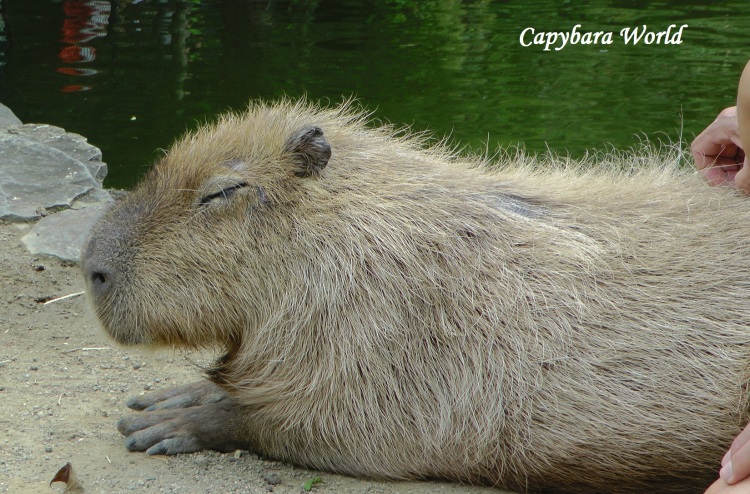 When she was just two years old I watched her performing for a crowd of people who wanted to photograph her. She was fantastic. Posing for about 10 minutes like a top model, tilting her head from side to side, then turning to different positions for the cameras. Finally she opened and closed her mouth a few times to hint that she might like a reward. Everyone else ignored her, but I went off and found a few bits of watermelon for her. In her youth she was a very friendly capybara but like many of the capybaras she got tired of being teased and taunted by thoughtless, ignorant humans.

Hinase was born on 28 April, 2010. Her mother was Fujiko and her father was Takeshi. Her grandmother was the great Donguri.