I am coming to the conclusion that the market for “cute” animal photos and videos is detrimental to Animal Welfare. In some countries it encourages people to buy wild animals as pets when in fact these wild animals are totally unsuited to become pets and usually suffer. It also results in an increasing number of zoos, often very small and cramped, which house cute animals in prisonlike conditions. These animals suffer greatly in small, unsuitable enclosures, often with concrete floors and in the case of capybaras, who are semi aquatic, their water source is a small plastic tub often barely larger than the capybara himself. We humans cause so much suffering to the animals we call “cute”. Capybaras, and all other species, are so VERY MUCH MORE than cute. 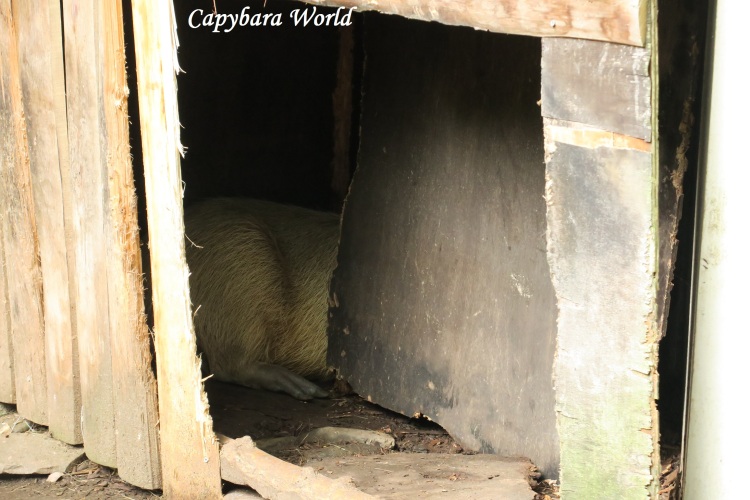 Kin was always frightened and spent much of the day hiding behind this wooden board in her small wooden hut. The sound of the visitors approaching was amplified by the wooden floorboards, wooden walls around which the sound reverberated, and broken concrete over which the visitors walked. Every time a child screamed she cowered in fear. At the opposite end of her enclosure was a tunnel and visitors made strange loud noises to hear the echo which frightened her even more. Her enclosure was small, the floor was entirely concrete and very uneven making it difficult for her to lie down. The people she was most frightened of were the keepers

In my videos and explanations I try to show the capybaras’, who I know so well, natural behaviour which is so much more interesting than cute photos of baby capybaras. Anyone who truly loves and cares about animals will want to know them at a much deeper level than merely “cute”. Older animals are invariably more interesting. As the capybaras grow older they develop their own individual personalities and character.

In an increasingly stressful world I understand the role that animals play in creating a refuge. Cute animals represent a world that is warm and welcoming, an escape from the frustrations and evils that too often represent the world of man. I see an analogy between pinup girls and cute animal photos. Neither do justice to the living beings the photos represent. Photos of cute animals represent a two-dimensional image, and in the case of animals, the animals suffer since their needs are too often overlooked in man’s selfish pursuit of cuteness, entertainment and a refuge at the expense of these animals.

The video below is Ran who was living in Kin’s horrible enclosure when I first visited in 2012. He died prematurely at a very young age almost certainly caused by stress. You can see how frightened he was all the time in this video. The fear in his eyes is palpable

Much of the blame for this growing danger to Animals’ Welfare lies in the way animals are increasingly being promoted as cute by YouTube and the world’s media. YouTube promotes videos of wild animals being kept as pets but a life as a pet is usually completely unsuitable for a wild animal. 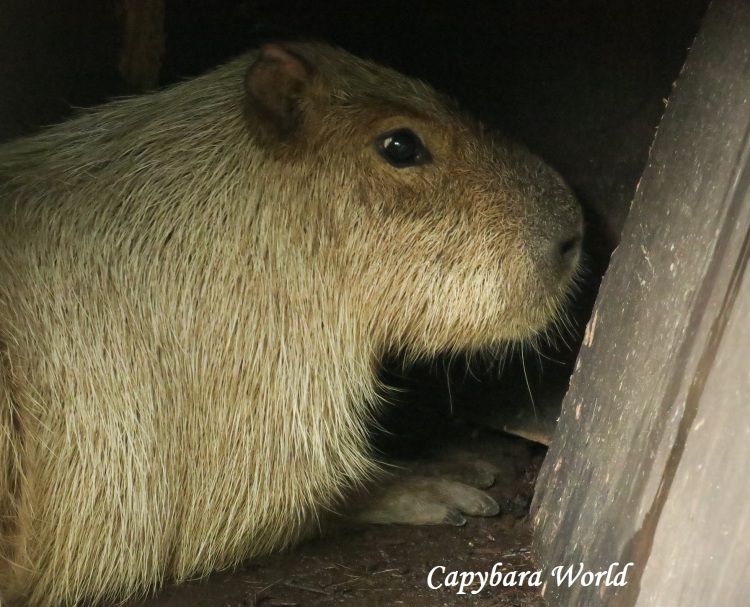 If you look at her eyes you can see how frightened she is. It is very stressful for any animal to live in a constant state of fear

In many countries particularly in Asia, including Japan, the media portrays wild animals as being cute and cuddly with the result that most people in these countries do not understand animals but simply view them as cute, as though they were animated cuddly toys. In Japan, to satisfy this market for cute animals, there are an enormous number of zoos which occupy very little space, sometimes even in shopping malls, where cute animals like capybaras, even lions in one case, are displayed in small, prisonlike enclosures totally unsuited to their needs. Capybaras are semiaquatic but many of these capybaras have only a small plastic tub into which they can barely squeeze. Some of the capybaras I have seen in videos look deformed. 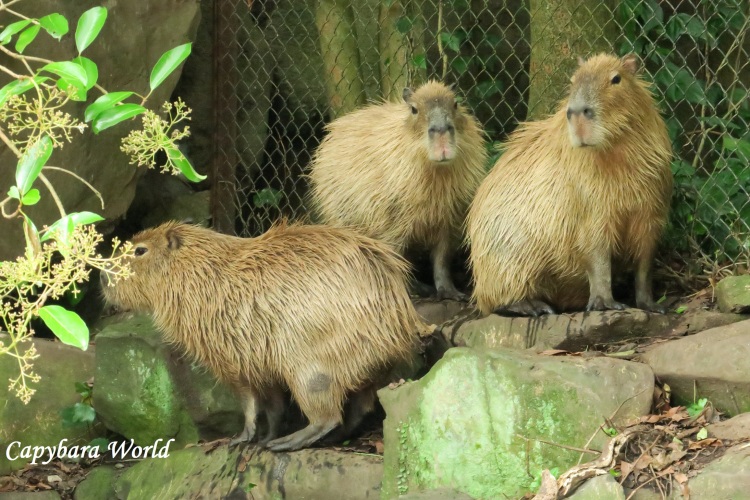 Several times every day her friends in the herd swam to the far side of the pond and climbed the rocky hill and sat beside the boundary fence to be as close to Kin as they could possibly get. In this photo from left are Sumire, Momiji and Ryoko

One friend who visited a small zoo in Osaka said the animals seemed very stressed and exhausted by all the petting and attention they received. 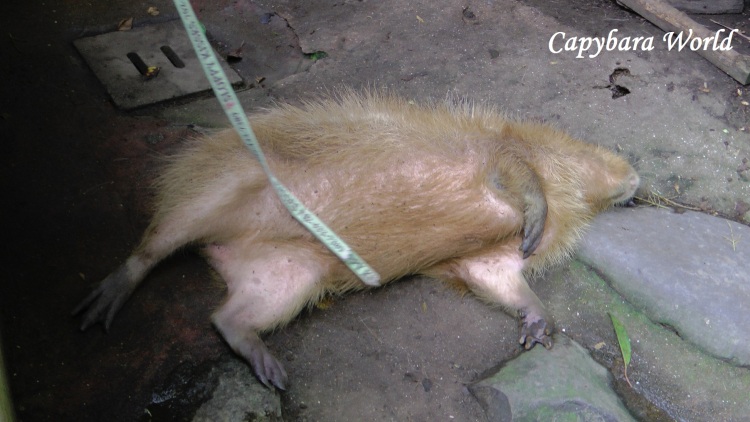 Marc and I were the only people who petted Kin. She was the sweetest most responsive capybara and it broke my heart the way the keepers completely ignored her. When I fed her by hand she was so gentle

It is vitally important that wild animals in captivity are able to display their natural behaviours. In the case of capybaras this means having a reasonably large enclosure with access to grazing and a good sized body of water. For more on this please look at my blog:

In some states in America it is relatively easy to keep a wild animal as a pet. Some of the people who keep wild animals as pets do so to increase their own status, find fame or to make money. In the case of capybaras people see videos of these exceptionally affectionate and gregarious animals being kept as pets and think “I want one” without having any understanding of the needs of these complex, highly emotional and intelligent animals. It seems many of these people can’t even afford the often expensive vet bills charged by the exotic animal vets who are the only vets with the knowledge to treat a sick or injured capybara.

Levels of the stress hormone cortisol are much higher in some wild animal species kept as pets and bonded with humans than in these species when they are bonded with other members of their own species. I suspect the same is true with capybaras. I certainly know of one capybara whose life is very stressful because he is bonded with humans.

It is very stressful for a capybara to be bonded with a human. Very few humans can spend all day at home so when the human who the capybara has bonded with leaves the home the capybara becomes exceptionally anxious and unhappy. Capybaras are herd animals and if a member of the herd disappears he/she will almost certainly never return having been killed by a predator. Capybaras are exceptionally sensitive emotionally as they need to be in order to assess the mood of other capybaras in their herd and avoid conflict. This sensitivity results in pet capybaras becoming stressed as they do not understand much of the behaviour of the humans they live with. 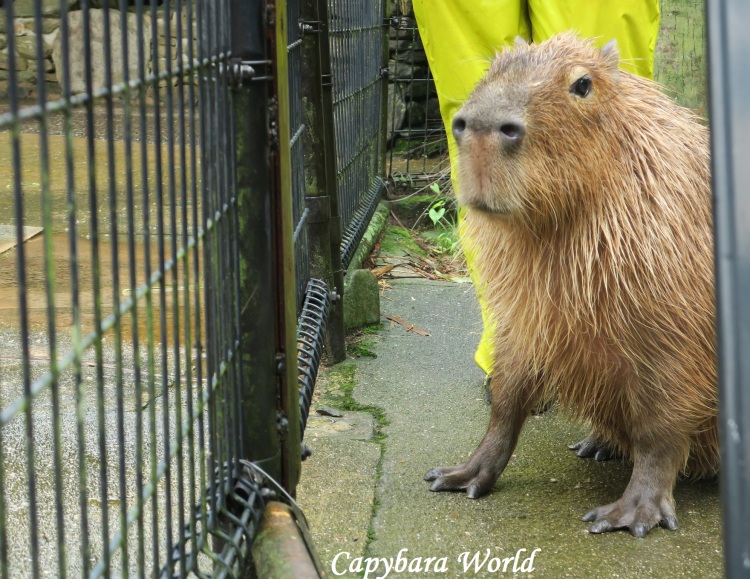 One day Kin managed to escape. She made her way to the entrance gate to her old enclosure where she had lived happily with all the other capybaras and looked in so longingly with this very sad expression on her face. Kin had lived with the herd until the day her sister, Gin, attacked her so badly that she had to be taken out of the herd to recover.

Baby animals are very cute and none more so than baby capybaras. However, as they grow older and stronger it is common for them to challenge the humans they live with. In the wild capybaras negotiate hierarchy by aggression and intimidation. When capybaras are bonded with humans they view the humans as their herd and turn this natural aggression in pursuit of hierarchy on the human. The pet capybara wants to be number one in the herd hierarchy replacing the human.

Many capybaras kept as pets are unhappy and this unhappiness can lead to aggression against the humans who control their lives. Not many people can deal in a positive and successful way with an aggressive capybara. An adult capybara weighs about 50 kg and has exceptionally sharp teeth. Most humans are no match for an unhappy capybara who vents his unhappiness by becoming aggressive. Capybaras can move extraordinarily quickly and can be very unpredictable. One minute they are resting, the next minute they have whipped round and attacked you.

I came across a website by accident which advertised capybaras for sale. These were capybaras who had outgrown their “baby” cuteness. They varied in age from about nine months to 3 years. The way in which they were described by the people selling them was heartbreaking. One seller described his capybara as “Sold as is with defects. Cannot be handled” as if he was selling a used car. Another seller described the capybara he was selling as “Suitable for display” as though this sensitive, living being was an inanimate object with no feelings or needs. I was in tears thinking about the unhappy lives humans had created for these loving animals. And I was appalled at the lack of compassion, concern or morality of the people selling these unwanted capybaras. 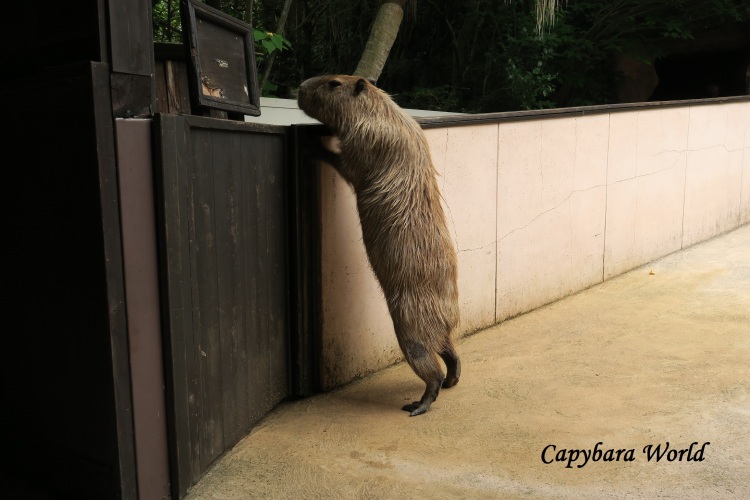 Sumire regularly escaped from the capybara enclosure and went to visit Kin. They called to each other and climbed on their hind legs trying to get closer to each other. Kin’s mother is Sumire’s grandmother.

Many zoos throughout the world keep animals in small, often concrete floored enclosures which are completely unsuited to the needs of these living beings who have feelings and needs and whose lives are important to them. Some zoos split up family groups or introduce unrelated animals into a group of a highly social species like elephants resulting in death and extreme depression. This was the case with Denver zoo and its elephants. Every animal is an individual often with very similar emotions to humans. In the case of mammals we share a common ancestry and very similar brain structures and neurochemicals. There is a growing body of research showing how rats feel compassion, will help another rat who is too weak to access food by dragging food over to him/her and will give up a treat in order to avert the suffering of another rat.