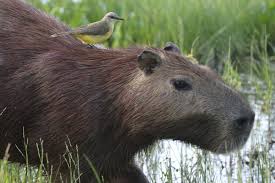 For an interval in the 20th century, the Lesser capybara, Hydrochoerus isthmius , was thought to be a subspecies of the larger Hydrochoerus hydrochaeris. However, genetic studies and studies of their anatomy in the mid-1980s, showed that the Lesser capybara was indeed a separate species. It’s karyotype (genetic sequence) has 2N equals 64 and FN equals 104. The karyotype of the larger Hydrochoerus hydrochaeris is: 2N equals 66 and FN equals 102.

There is not a great deal of information about the Lesser capybara, Hydrochoerus isthmius, as relatively few studies of this species have been done. Their conservation status is not known but they may be under threat in some of their traditional habitats. Their numbers are far smaller than Hydrochoerus hydrochaeris, the larger, well-known capybara. Their population status and current distribution in Colombia is unknown.

The Lesser capybara is under threat due to subsistence hunting and the destruction of its habitat. The gallery forests where they live are being cleared and the swamp lands, vital for this semiaquatic species, are being drained. The drainage of the swamp areas bordering the Magdalena River are having a particularly detrimental effect on their numbers.

Predators include jaguars and pumas on land and Cayman in water. Additionally, young capybaras are often attacked by snakes (boa constrictors), crab eating foxes, some birds like the caracara and black vultures.

The Lesser capybara is found in the Caribbean region, the northern end of the Pacific region and the inter-Andean valleys of the Cauca and Magdalena rivers. 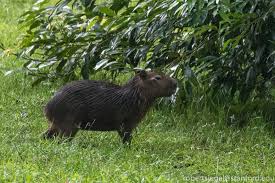 Both species live in the same type of habitat: a wide variety of lowland habitats with access to ponds, lakes, rivers, swamps, streams or reservoirs. These habitats include gallery forests, seasonally flooded savannas and wetlands. The highest elevation where capybaras, only the larger Hydrochoerus hydrochaeris, have been found is 1500 meters in the Chapada dos Veadeiros National Park in Goias State in Brazil.

(A gallery forest is where the forested area forms a thin ribbon of trees, only a few meters wide, along a riverbank or bounding a wetland area. The surrounding area, moving away from the river or wetlands, is primarily grassland with at most a sparse scattering of trees. These gallery forests are able to exist because they draw water from the rivers. The extent of gallery forest are diminishing as a result of human activities.)

Like their larger relations, the Lesser capybara, Hydrochoerus isthmius, is semiaquatic and usually most active during the afternoon and at night to avoid predators. Capybaras have subcutaneous sweat glands which are sparsely distributed throughout the body, meaning that their ability to sweat is not well developed, so in order to control their body temperature (thermoregulate) in the heat of the day, capybaras rest in water or under the shade of trees and bushes. Capybaras also use water to escape from predators, and they prefer to mate in water. Water is also the source of their preferred aquatic plants, an important part of the capybara diet.

Capybaras are a sedentary species whose home range may extend from 5 – 16 hectares, depending on the amount of grazing available. This home range will include a large area of grassland, as grasses (and aquatic grasses) form the major part of the capybara diet, an area of slightly elevated dry land for resting, and a permanent body of water. Capybaras also live in forested/jungle habitats beside a river. In these forested habitats the family group usually consists of one male and 1 or 2 females. The Lesser capybara also eats algae.

There have been no studies indicating that interbreeding between the 2 species of capybara has taken place. However, in Colombia some capybaras of the larger species, Hydrochoerus hydrochaeris, were taken from the Orinoco River region to recreational houses in the Cauca Valley, from where they escaped into rivers and wetland areas.

Encounters between 2 species of the same genus can lead to hybridisation which may have detrimental effects on hybrid descendants. If these encounters are extensive it may result in the local extinction of both parental species. There is no evidence that this has or could happen to these 2 species of capybara, Hydrochoerus hydrochaeris and Hydrochoerus isthmius.